That means we have yet another chance to finally allow same-sex couples to marry. You’ll likely be hearing a lot about this in the next few days. Here is a quick primer:

1) To pass in its current form, the bill needs 71 votes in the House. That is a high hurdle, because we could not even get 60 votes last May. However, the bill can be amended to change the start date (for next June) at which point it would only need 60 votes. We are VERY close to having those 60 votes.

2) A few representatives are still undecided. The single most important thing you can do right now is send a personalized email/message/call to your representative. GO HERE to send a message or LOOK AT THIS POST for contact information.

*A special note for those in Kankakee, Bradley, and Bourbonnais. Democrat Kate Cloonen met with the local equal rights organization this Wednesday at Family House Restaurant (my favorite breakfast spot on the planet, so I took this personal). At the meeting she said that she does not believe gay people in Illinois should be able to marry. Please take a moment now to kindly ask her to re-consider. Voting to keep people unequal (in the Land of Lincoln, of all places) should be embarrassing.

3) If you end up in polite discussion with opponents of equality this week (I hope so), here’s a quick Argument Cheat Sheet

–Religious liberty is important. That is why the bill does not force any church to perform services against their wishes. Also, the bill makes ZERO changes to discrimination laws in the state. A completely separate law governs non-discrimination rules in Illinois. In other words, passing this bill will not in any way impact the rights or obligations of any religious person or entity.

–Great. But permitting a loving couple to get married in no way impacts the parentage of children.  Please do not use children as an excuse to perpetuate inequality.

–Actually, gay couples in Illinois who have a civil union DO NOT receive federal marriage benefits (i.e. Social Security rights, estate tax breaks, +1,000 others). That is because the federal government does not recognize civil unions, but they do recognize marriage.

Just like Rio de Janiero stole our 2016 Summer Olympics, it looks like another South American country (damn Argentina!) has swiped our chance at the first American Pope.  This week the archbishop (“really big bishop”) of Buenos Aires was magically transformed into Pope Francis I (do we even use I or do the numbers start at II?).  Catholic friends whose judgment I trust are reportedly happy about this development as Francis will be the first Latin American vicar of Christ–and a Jesuit to boot!  Most of my Catholic friends are Jesuits, so obviously their opinion is biased.

Confession: I attended a Jesuit law school.  I even took a small law school class led by a Jesuit priest with whom I had a private lunch at Ralph Lauren.  He paid.  Long story short, my opinion on the matter is also suspect.  I wouldn’t blame you if you stop reading now because this blog post was being written at the command of my Jesuit masters.  I’m easily bought.

I digress.  Being a one-dimensional person, upon hearing the glorious news of the Pope’s naming (how we survived a few days without a Pope still baffles),  I immediately Googled to get his opinion on gay rights.  I know what you’re thinking.  That’s like Googling to find out which of the Dixie Chicks is the talented one.  The answer is obvious: all of them.  Why bother Googling Pope candidates on gay rights.  They are all against it.  That’s what you were thinking, wasn’t it?  And you’d be right.  But I didn’t know that at the time, so cut me some slack.

After a Google search that returned 250,000,000 items and took .13 seconds I learned from the Huffington Post:

In 2010 Bergoglio said about a gay marriage bill in Argentina that “At stake is the total rejection of God’s law engraved in our hearts.”

I wasn’t expecting an archbishop who has “Gay Pride Parade Grand Marshal” on his (“her” is not a pronoun that could ever apply here) resume.  But I was at least hoping for a guy who was a little more subdued on the sexual issues.  Dreams shattered.

Normally I could pick up the pieces after this disappointment by remembering: “I’m not Catholic, so what the hell do I care what their leader says?”

But I couldn’t shake it off this time.  Why?  Because I read news like this on the same day that Bergoglio became Francis:

[In a discussion about the prospects for the gay marriage bill in the Illinois House]…One House Democrat I talked with last week wants to vote for gay marriage, but his strongly Catholic wife is absolutely, completely dead set against it.

Believe it or not this anonymous Democratic legislator’s wife is not the only Catholic working to ensure gay couples are never allowed to marry.  For example, Chicago’s own archbishop, Cardinal Francis George (totally different Francis) penned a letter which said:

[Allowing gay marriage would  force people to] “pretend to accept something that is contrary to the common sense of the human race.”

Sheesh Cardinal Francis George, tell me how you really feel.  I don’t recall every saying a bad word about you…at least before this post.  You’ll be happy to know that after reading your thoughtful letter I sat down and seriously contemplated whether the most important, intimate relationship of my life was indeed “contrary to the common sense of the human race.”  And while I cannot speak for the rest of the human race, for my own sake I concluded that you were full of shit.

Making matters worse (I’m no longer writing as if I’m talking to the Cardinal), this letter was required to be read in virtually all Catholic churches in Illinois.  Besides talking about the human race, it called on parishioners–everyday Catholics; good folks–to call their legislators to ensure that state law only allows people to get married if the Catholic church deems them worthy (divorced people?).

So where are we now?

Awaiting a final vote in the Illinois House which would end one more vestige of enshrined legal discrimination.  But depending on who you talk to we are either one or five or ten or twelve votes behind.  Everyone agrees that it’s a bit shaky.

Keep in mind, this is in a chamber made up of 71 Democrats when only 60 votes are needed for passage.  Even if we assume that not a single Republican will do the right thing (*sigh*), that still means that one to two dozen Illinois Democrats are prepared to permanently put their names in the history books with a vote for discrimination. (In a few decades I’m sure they will have good excuses worked up for why they had no backbone when it counted most).

What on earth are they thinking?  My guess: they are scared of angry church letters.  And wives.  It’s mostly the wives fault.  Which is why I have taken a vow to never marry a woman.

P.S. In all seriousness, I do wish Pope Francis the best.  May he use the position he’s been given to heal more people on the planet than he harms.

“We don’t have to engage in grand, heroic actions to participate in the process of change. Small acts transform the world.”

I spent the first twenty years of my life berating myself over whether I should keep quiet about my sexual orientation.  What would people think?  Would I be ridiculed?  Who would joke about me when I wasn’t around?  Who would be disappointed?  Would my life be worse?

Guess what happened?  A lot changed.  And I’ve never been happier.

The people that matter most in my life didn’t just support me: You became my biggest defenders.  There is nothing so sweet as having others standing at your side, ready to challenge those trying to bring you down or treat you unfairly.  Every day I am humbled by those who stand up for love, fairness, and equality–even when it isn’t popular.  I know you don’t have to do it.  But you do.   And it means the world to me.

No good deed goes unpunished.  If you have any gas left in the tank, I would be so grateful if you could take one last step to finally end this battle in Illinois and ensure our state treats everyone the same, including people like me.  As you might have heard, in early January legislators in Springfield will vote on a bill that would allow same sex couples to solidify their loving relationship by way of a marriage. 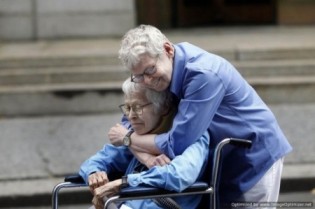 The chief sponsor of the bill explains: “It’s very straightforward.  We treat all couples with the same respect and dignity in the eyes of the law and we protect the rights of religious institutions to either consecrate or not consecrate marriages within their faith as they see fit. It’s very important that government not involve itself in religion on either side of the issue.”

Here’s the reality: Right now, internal counts of those legislators show that we may not have the votes.  It is very close, but some representatives are unsure.  They will make up their mind based on how their constituents voice their opinion.

That is why I am urging you to take 5 minutes to draft a very simple email and send it to your State Representative and State Senator, asking them to treat all Illinois residents fairly by supporting marriage equality.

It does not have to be long or time-consuming.  But by typing out a few sentences and hitting the send button, you may be the tipping point.  All you need to include is this:

1) Share you name, that you are a voter in Illinois, and indicate where you live.  It makes a big difference if the lawmaker knows that you are a constituent in their own district.  Say if there are multiple voters in your household (or, better yet, have each one send an email).

2) Urge them to vote in favor of marriage equality.  You can say this in one sentence or fifty.

That’s it.  More than at any other time, that simple act can make a real difference.  This is not like casting a vote for President when you know what the outcome will be in Illinois.  It is VERY close, and every single email counts tremendously.

It would be great if you could do this right now…as you are reading this.  Because if you don’t do it now, you might forget.  Life is hectic.  Below you will find a list of legislators and email addresses.

Please send a message now explaining where you stand.

Not sure who your legislators are?  Go to this site, type in your address, and get their names, then come back here to get their email from the list below….

1) Step #1: FIND YOUR STATE LEGISLATORS: HERE (Remember to look for your STATE Representative and STATE Senator)

***Update: As expected, the bill passed the committee and will reach the House floor.***

Now:  In fact, today the Youth & Family Committee is debating the civil unions bill which has been so close to passing in the past.  You may remember this committee as the one that the ‘Pro-Family’ advocates lambasted because a gay man was chosen to head the committee.  Keep an ear open to discover how it turns out.

Also, the LDS Church in Illinois isn’t missing a beat, reminding us that if the bill passes, the world will indeed turn into Ron Jeremy’s dreamland…

This will empower the public schools to begin teaching this lifestyle to our young children regardless of parental requests otherwise. It will also create grounds for rewriting all social mores