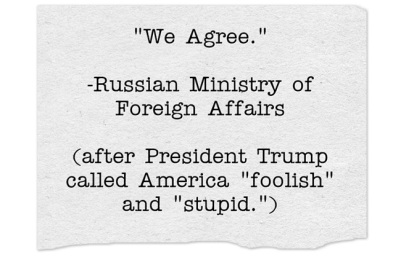 Yesterday, the American President stood on foreign soil, next the smiling face of a murderous dictator who attacked our democratic system, and blamed America. The President disgraced the office that the American people allow him to hold.

This is not another random mistake in today’s political circus. The President of the United States’s first task is to stand as our champion out in the world. He failed.

You have permission to say: I won’t tolerate this one.

You probably already knew that the President was an extreme narcissist. You knew he shot from the hip. You knew he had “issues.” But you were willing to overlook that, because you hoped for change to our politics.

You will be tempted by excuses soon. The easy way is to take them, pretend that there is some explanation for the President’s disgrace, and fiddle away as usual. Please, please be stronger than that.

You will hear that the President was misunderstood. That it’s being blown out of proportion. That he really must be playing some sort of complex diplomatic game. That maybe he chastised the dictator behind closed doors.

You will hear distraction, mention of other people that you don’t like, Hillary Clinton, Barack Obama, everybody does it, they were worse, but what about this, on and on and on.

You will hear a “clarification” statement, hoping to quell your fears, correct the record, ease any concern. See, fixed, please move along.

Please don’t give in that easy.  You have permission to say: Enough.

As citizens, it’s our obligation.